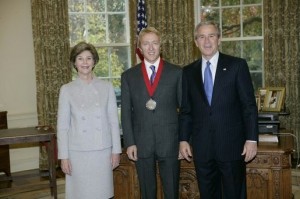 At a recent White House ceremony, noted antiques experts Leigh and Leslie Keno were awarded the National Humanities Medal by President Bush. The Keno brothers were two of eleven Americans who were given the award, first presented in 1989 as the Charles Frankel Prize. It honors individuals and organizations whose work has deepened the nation’s understanding of the humanities or helped preserve and expand America’s access to important humanities resources.
“We got this award mostly because of our involvement with the Antiques Roadshow,” said Leigh Keno (shown), referring to the popular PBS program that regularly features the pair as appraisers and commentators. “We encourage younger people to get involved in history and antiques.” Leigh, a New York City antiques dealer and president of Leigh Keno American Antiques, said it was “especially exciting” when President Bush put the medals around his and Leslie’s necks.
[amazon_carousel widget_type=”SearchAndAdd” width=”550″ height=”200″ title=”More on the Antiques Roadshow:” market_place=”US” shuffle_products=”False” show_border=”False” keywords=”Antiques Roadshow” browse_node=”” search_index=”All” /]