News & Views From the World of Antiques & Collectibles
By Ken Hall
Each year an army of Salvation Army Santas braves the cold and accepts donations of loose change and sometimes bills from generous folks who toss what they can into the familiar red kettles. And every year it seems we hear about someone (always anonymous) donating a rare and valuable coin, and it often makes the news. This Christmas season, there was a rash of such donations, starting with a 1/10 Krugerrand gold coin that someone (presumably the same person) gave in Iowa City, Iowa, for the fifth consecutive year. 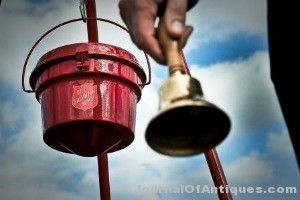 Other generous donations: a quarter-ounce American Eagle gold coin with a face value of $10 but gold content worth more than $400, in Bettendorf, Iowa; three half-ounce gold coins with a combined value of about $2,600, in Morris, Ill.; a gold coin worth about $1,800 wrapped in a dollar bill, with a note attached, in Houston; and a 1904 $20 gold piece worth about $1,800, in Mishawaka, Ind. Also, a couple who inherited two gold coins bought at a Salvation Army auction in 2001 donated them. They’re worth over $2,100.