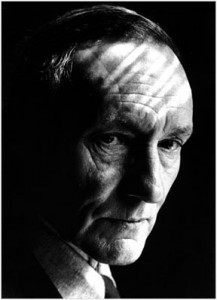 William S. Burroughs is the third best known Beat Generation writer — behind Jack Kerouac and Allen Ginsberg — but he may just move up a notch or two now that the New York Public Library has announced plans to buy the Burroughs archive. It contains 11,000 pages of manuscripts and typescript material, including draft versions and notes for just about all of Burroughs’ works through 1972. Most of the material in the archive from the 1960s and ‘70s has never before been seen.
Burroughs’ most famous work is “[amazon_link id=”0802140181″ target=”_blank” container=”” container_class=”” ]Naked Lunch[/amazon_link],” a hallucinogenic, drug-addled novel that was banned in Boston in 1962 before a landmark reverse ruling in 1966. In an unpublished essay from the archive, he wrote, “As a young child I wanted to be a writer because writers were rich and famous. They lounged around Singapore and Rangoon smoking opium in a yellow ponge silk suit. They sniffed cocaine in Mayfair and they penetrated forbidden swamps with a fanciful native boy.”
[amazon_carousel widget_type=”SearchAndAdd” width=”550″ height=”200″ title=”Books by William S. Burroughs” market_place=”US” shuffle_products=”False” show_border=”False” keywords=”William S Burroughs” browse_node=”” search_index=”Books” /]