Ken’s Korner: Flat-faced figures were built on Keros, but why? – The Journal of Antiques and Collectibles – May 2006 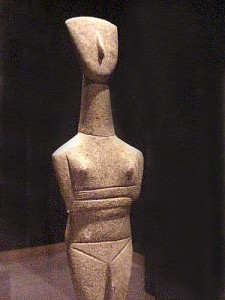 Archaeologists are planning a major dig on the Greek island of Keros in an attempt to explain just why the ancient people there produced flat-faced marble figurines, some of which inspired artists such as Pablo Picasso and Henry Moore. The seafaring Cycladic civilization flourished about 4,500 years ago, but why they produced the figures has been a mystery. In recent years, the figures have been pillaged and sold to museums and private collections in the U.S., Europe and Japan.