News and Views from the World of Antiquing and Collecting
By Ken Hall
The fake stone tablets from the 1956 Hollywood blockbuster The Ten Command-ments sold for $60,000 at an auction held in Calabasas Hills, California, titled Drama, Action, Romance: The Hollywood Auction.  The tablets are fake, of course, but they are still the most famous prop from the film. Actor Charlton Heston brandished them in the role of Moses. They are 23 inches tall by 12 inches wide and were constructed of richly hewn fiberglass on wood backing. They were made to look irregular and chipped, as if carved by God. 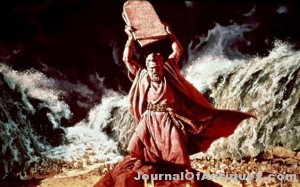 In other results: Mr. Spock’s famous blue tunic from the original hit TV series Star Trek brought $95,000; a pair of Spock’s ears (made from foam rubber and measuring just two inches square) fetched $1,500; an original film-modified Smith & Wesson Hand Ejector MK II six-shot revolver used by Harrison Ford in Indiana Jones rang out at $75,000; a full alien warrior creature costume from the 1986 film Aliens (the sequel to Alien) went for $80,000; and a Dilophosaurus dinosaur model from the hit film Jurassic Park made $18,000.