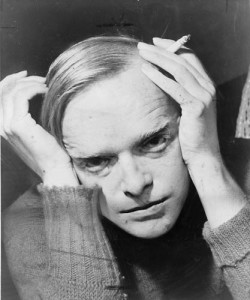 Family photos and letters written by Truman Capote, the author of “[amazon_link id=”0375507906″ target=”_blank” container=”” container_class=”” ]In Cold Blood[/amazon_link]” and subject of the hit film “[amazon_link id=”B001N77YPS” target=”_blank” container=”” container_class=”” ]Capote[/amazon_link]”, have gone on display at the Monroe County Heritage Museum in Monroeville, Ala., not far from where Capote spent part of his boyhood. Monroeville is regarded as the literary capital of Alabama. The material was assembled mostly by Capote’s cousin, Jennings Faulk Carter, 79, a retired crop-duster pilot who put together the items in a scrapbook during his life.
Capote died in Los Angeles in 1984 at age 59. Even after leaving home to seek his literary fortune, he maintained close emotional ties to his aunt, Mary Ida Faulk Carter (Carter’s mother and the younger sister of Capote’s mother). In one letter, he writes that he and friend Talullah Bankhead won’t be able to visit because he has to go to Hollywood to work on the movie version of “[amazon_link id=”B001HPP2XW” target=”_blank” container=”” container_class=”” ]Breakfast at Tiffany’s[/amazon_link].” He writes that Marilyn Monroe will play the lead (a role that went to Audrey Hepburn).
[amazon_carousel widget_type=”SearchAndAdd” width=”550″ height=”200″ title=”More on Truman Capote:” market_place=”US” shuffle_products=”False” show_border=”False” keywords=”Truman Capote” browse_node=”” search_index=”Books” /]