Ken’s Korner: What did King Tut and Jefferson both enjoy? – The Journal of Antiques and Collectibles – January 2006 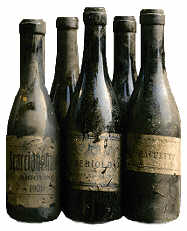 In a word: wine. King Tutankhamen was a red wine drinker, according to a researcher who analyzed traces of the vintage found in his tomb. And Thomas Jefferson became so obsessed with wine while living in Europe he dreamed of starting a wine culture in America. Wine bottles from Tut’s time were labeled with the name of the product, the year of harvest, the source and vine grower. The presence of syringic acid, detected in bottle scrapings, confirmed Tut preferred red to white.
Jefferson’s status as the undisputed father of American viniculture has been chronicled in a PBS documentary called “[amazon_link id=”0977450309″ target=”_blank” container=”” container_class=”” ]The Cultivated Life: Thomas Jefferson and Wine[/amazon_link].” It has already aired. The film, narrated by Hal Holbrook, shows how Jefferson dreamed that a wine culture in America would lend refinement to everyday living. In a way, his dream came true — 150 years later — as Americans have enthusiastically embraced wine. For a DVD of the show ($19.95), [amazon_link id=”0977450309″ target=”_blank” container=”” container_class=”” ]head to Amazon[/amazon_link].