DALLAS – The Personal Property of Shirley Temple Black exceeded $1.6 million at a public auction of her personal collections, outfits, U.S. diplomat awards and other keepsakes on Monday and Tuesday, Dec. 5-6, 2016, at Heritage Auctions.
A selection of jewelry sold for more than $1 million. A cherished Tiffany & Co. diamond, platinum brooch, worn by both Temple and her mother Gertrude, sold for $250,000, and her 8.43 carat diamond, platinum ring, given to her by her father, sold for $137,500.
A session of Temple’s personal property sold for $648,000. Members of Shirley’s Army, a fan club devoted to “America’s Little Darling,” who attended the auction, jumped up, hugged each other and cheered when a pair of her childhood tap shoes sold for $20,000, as well as when a small, red 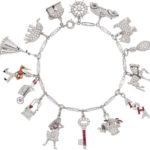 tambourine used by Shirley’s mother to teach her timing and rhythm for dancing sold for $2,500.
Temple’s Tiffany Studios Nasturtium leaded glass table lamp sold for $62,500 and a 1939 black and white photo signed to Temple by Walt Disney– showing his famous, seven-figure Academy Award for Snow White and the Seven Dwarfs – ended at $32,500. A drawing by Charles Schulz, dedicated to Temple and featuring his famous Snoopy character, sold for $16,500.
“It was delightful to see a packed auction room crowded with Shirley Temple’s most ardent fans,” said Carolyn Mani, consignment director for Trust and Estates at Heritage Auctions. “Bidders flew in from all over the nation and as far away as Australia to participate in the auction.” 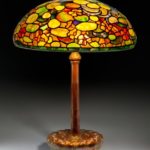 Collectors zeroed in on the most personal items, including a whimsical Art Deco diamond, ruby, platinum bracelet given to her by actor Bill “Bojangles” Robinson sold for $40,000. Temple and Robinson are still recognized as cinema’s first interracial couple to dance on-screen. Collectors bid to own home furnishings as well. A 14th century Umbrian Baroque Carved Walnut Refectory Table, with solid provenance from the William Randolph Hearst Collection, sold for $10,000. A circa 1940, Eight-Piece Walter Lamb Group of Bronze Verdigris Patio Furniture, circa 1940 ended at $9,375 and a Spanish Baroque Library Table from the early 18th century sold for $6,875.