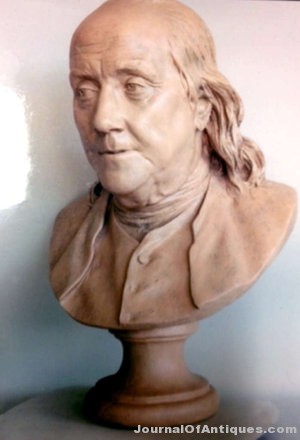 A rare 1778 porcelain bust of Benjamin Franklin by Jean-Antoine Houdon has been recovered after being stolen out of its owner’s home by the cleaning lady. George D’Angelo told police he discovered the bust missing from his Bryn Mawr, PA, residence, and neighbors said they saw the cleaning lady, 46-year-old Andrea Lawton, speeding away from the scene. She was arrested in Elkton, MD, with the bust in a duffel bag, after leaving Mobile, AL. Police said the bust sustained minor damage—a cracked breastplate.