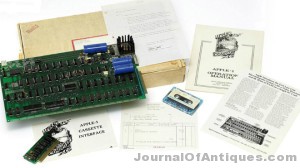 An Apple 1 computer from 1976 (one of the first computers made by the fledgling firm) sold for $668,000 at an auction held by the German auction house Breker. An unidentified Asian buyer bought the Apple 1, which Apple co-founders Steve Jobs and Steve Wozniak built in a family garage. It is one of only six remaining functioning models in the world. Breker sold one last year for about $500,000. In 1976, the Apple 1 retailed for $666 for the circuit board only. The case, keyboard and screen were sold separately.