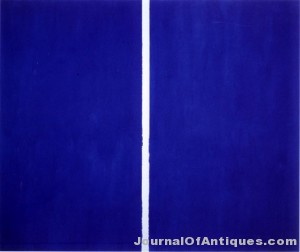 An oil on canvas painting by Barnett Newman, rendered in 1953 and titled Onement VI, sold for $43.85 million at a Contemporary Art Evening Auction held May 14 by Sotheby’s in New York. It was a new world auction record for the artist. Also, Gerhard Richter’s 1968 oil on canvas titled Mailand (Cathedral Square, Milan) breezed to $37.13 million (also a new auction record); and Yves Klein’s 1959 pigment in synthetic resin on sponge, metal stem and stone base titled SE 168 hit $22 million (a new record). Prices include a 12 percent buyer’s premium.