Collecting with Jeff
by Jeff Figler
A few years ago my wife and I dropped our son at Dickinson College in Carlisle, PA, so that he could attend a few summer classes. We were then going to drive to the Shenandoah Mountains area, spend some time there, and pick him up a couple of weeks later.
Well, we didn’t quite make it.
We spent the first day in Blue Bell, PA shopping. After going through a few stores and seeing Amish quilts we were hooked. The quilts were amazing. The details and the intricacy of the quilts were simply hard to imagine. I asked a few shopkeepers about the quilts and was told that many of the Amish people depend on quilting for their livelihood. 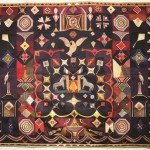 I realize that the Amish are not the only people who make quilts, but it did make me think about how quilting first came to America. Well, I found out.
The history of quilts started long before the Brits arrived in the colonies. The word “quilt” actually comes from the Latin word “culcita” which means a “stuffed sack.” Nowadays, we think of a quilt as a cloth sandwich, with a top, which is almost always the decorated part, a back, and a filler in the middle. There are usually thought to be three different types of quilts, namely, the plain or whole cloth quilt, appliqué quilts, and pieced or patchwork quilts.
Originally in America, a quilt was strictly used for providing warm covers for beds. They were also used as hangings for doors and windows that were not sealed well enough to keep out the cold.
The earliest quilts in America were made by English and Dutch settlers. Early settlers could not afford to merely discard blankets when they became worn out. Therefore, when blankets become worn, they were patched, combined with other blankets, or used as filler between other blankets. They were put together to keep people warm.
Many of the quilts that were pieced and patched between 1750 and 1850 are preserved to this day. Some are so elaborate that they are regarded as precious heirlooms, and preserved in homes and museums.
As for the Amish, in the early 1700s they began settling in the Pennsylvania farmlands as well as in the Midwest. They had emigrated from Europe with the hope that they would have the freedom to live according to their religion. 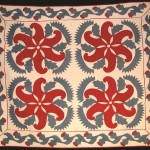 In general, quilting became very popular as the country expanded. The Medallion style of quilt was popular in the early 1800s, which had a central motif surrounded by multiple borders. A “tufted” quilt was used as well, which was tied in enough places to keep the filling intact.
In the 1800s, a custom developed that a young girl needed to make a baker’s dozen of quilts before she became engaged. Her baker’s dozen consisted of 12 utility pieced quilts, and one great quilt, either a pieced or appliqué quilt for her bridal bed. One other custom was for mothers to make several quilts for each of her children to have when they left home.
In the mid-1800s the sewing machine was introduced, which served to lessen the dependence on hand-sewing, but hand-quilting still remained the favorite method for the next 100 years.
With the development of the frontier, quilting became more of a creative art than one of necessity. More and more women had the time and money to pursue quilting.
During World War I, the U.S. government urged citizens to make quilts for the soldiers. In World War II, quilting was used to raise money to support the Red Cross. “Signature quilts” became popular. In a “signature quilt”, people or businesses would pay to have their names embroidered on the quilt blocks. The blocks were then sewn together and quilted, and the finished quilt was then raffled, with the proceeds going to the Red Cross.
A great surge of popularity for American quilts occurred in 1976 with the Bicentennial celebration. The quilt became a means of expressing national pride and achievement, as well as a means of reminding people of the past.
Nowadays, quilting still remains popular, as a leisure activity among women, and also among artists as a means of expressing their creativity. 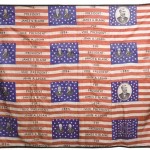 However, quilts are also very popular among collectors. High prices are often paid for quilts when they are auctioned. As an example, an 1884 Folk Art quilt for the
campaign of Republican James Blaine for President and John Logan for Vice President sold for $9,500 at auction. Another political quilt, this one from 1880, promoting the campaign of James Garfield, sold for over $14,000 in a Heritage Auction. Finally, a circus bed quilt from the early 1900s went for over $17,000.
Quilts have certainly become impressive works of art, and cherished by people of all ages and walks of life.

Friendship Quilts: A Gift of Remembrance

History and Care: The Importance of Provenance and Condition in Today's Quilt Market

Art of the Needle: Masterpiece Quilts on view at the National Heritage Museum