by Jessica Kosinski
Braided rugs have been produced for centuries in some form, and they have also gone by many names, including rag rugs. Although we now consider them to be common household items, they have a very rich history, both in Europe and in North America. They are even prominently featured in works of art by popular artists, such as Wallace Nutting. But just how did braided rugs become so popular? Let’s take a peek at what started the tradition of braided rugs in homes and how they have changed over the years.
How Braided Rugs Came to Be
Early braided rugs in both Europe and North America were made by frugal families who had to be careful about how they spent what little money they had. People living in the time period between the 1600s and the 1800s often found multiple uses for everything in their homes whenever possible, in an effort to make the most of what they had. In the case of braided rugs, scraps 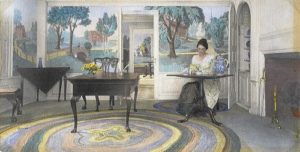 of clothing were kept and used to make floor coverings.
Whenever a person outgrew a piece of clothing or other fabric, such as bedding, became too worn out to serve its purpose, the fabric was cut into strips. Each fabric strip was then painstakingly laid out and folded in a specific way, allowing the owner of the fabric to weave the strips together into tight braids. Those braids could then be turned into rugs of any desired size.
How the Making of Braided Rugs Changed in the United States
Some early braided rugs, particularly those used by early settlers who came to what is now the United States, were not even made out of fabric. They were made out of straw. However, the general design concept was the same. The straw was woven together to create braided or woven mats, which settlers used most commonly by their doors or fireplaces. 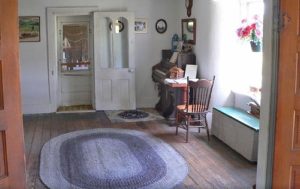 American settlers soon learned how to adapt their rug braiding techniques and incorporate those being used by the Native Americans. That led to the creation of more fabric rugs, some of which had intricate styles. For example, certain braided rugs were made to have different patterns on each side. Those reversible rugs were both functional and fashionable for the time.
Another major change occurred primarily in New England, where the 1800s saw woolen mills popping up everywhere. At that time Americans no longer had to make braided rugs out of scrap fabric because fabrics became more common and less expensive. That is when rug braiding started to become more like a hobby or an art form for Americans.
Eventually the practice also evolved to the point where many braided rugs are now made with braided yarn instead of fabric. Many of today’s braided rugs even feature not just patterns, but full images in their centers. Animals are among the most popular images included in their centers.
The Oldest Surviving Braided Rugs
Today, many of us see antique braided rugs as works of art in their own right. However, even though an increase in fabric availability made the practice of creating braided fabric rugs more common in the 1800s, the rugs themselves were still considered to be nothing more than functional items. It took a lot of time for such rugs to wear out, but when they did they were often discarded or used for outdoor purposes. As a result, very few of those early examples have survived to the present day. Also, those that have are often not in very good shape because they were well used. 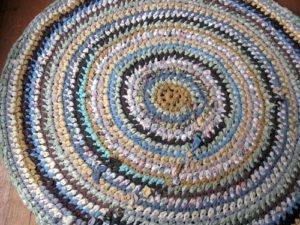 Among the earliest examples of braided rugs known to have survived in Europe is one that is said to incorporate rags from army uniforms. Those uniforms are supposedly from the 1815 Battle of Waterloo. In the United States, however, rag rugs from as early as the 1760s have survived. Although, rugs from 1800 and beyond are far easier to find.
The Commercial Manufacturing of Braided Rugs
In modern times the creating of braided rugs has changed even further because of advancements in technology. These days people can use tools to make rugs much faster than they were made in centuries past. There are even companies today that mass produce braided rugs for the general public.
Thorndike Mills is one of the most well-known companies to mass produce rag rugs in New England. The company began when an Armenian refugee named Gabriel (Gary) Garabedian immigrated to Boston in 1921. By 1925 he had started making rag rugs as a business, but the Great Depression caused him to put his business on hold. Then, in 1933, he managed to restart his business in Thorndike, Massachusetts as G.M. Garabedian & Co, which has since become known simply as Thorndike Mills. Thorndike Mills is still in operation today and produces a wide variety of rugs, including rag rugs that are truer to the construction of original hand made rugs than those produced by any other U.S. factories.
Shopping for Braided Rugs
True antique braided rugs or rag rugs, which may or may not have a braid pattern, can be worth several hundred dollars or more depending on their exact size, age, and condition. However, dating a rag rug or braided rug can be difficult unless its history has been recorded. Since most antique rag rugs were made by hand, they were often passed down through families, if they survived. Therefore, if you wish to purchase an authentic antique rug of that type, you may need to do some extensive research. 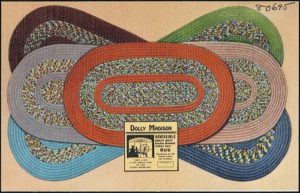 Alternatively, one way to at least start to identify the age of a rug is to remember that they were made from fabric scraps of all different types, which means that they should not have distinctive patterns such as those you might see on a modern manufactured rug. Although, it is worth noting that many early rugs incorporated long strands of black wool because black was a common clothing color among early settlers. You can also examine the shape of the rug to get a sense of its maximum age. Certain patterns evolved among specific groups of people, such as the Shaker “Flower” pattern, or during specific time periods in history.
If you are simply looking to capture a historic look in your home but are less picky about the actual age of the rug then a rug from a modern manufacturer might be a better choice. Such rugs often have economical prices and will not have some of the condition issues you may see in similar antique rugs. However, they will give you the look and feel that you are seeking.
Jessica Kosinski has been a freelance writer specializing in writing short articles for 15 years. She is also an avid collector of both antique books and Star Wars memorabilia. Although she is not in the antiques industry professionally, she has learned a lot about antiques over the years by periodically helping out at her mom’s antiques shop in Greenville, NH. She currently balances maintaining the antiques shop’s Facebook page, www.facebook.com/MallofNE, and working on various freelance writing assignments. She can be reached at dementorskiss77@yahoo.com.