Comic Character Collectibles
By J.C. Vaughn
Collector Jason Versaggi knows both the cold, analytical, logical purchases for his collection on one end of the spectrum, and the nostalgia-laced specter of, as he puts it, “going home.”
“My Mom bought me my first two comic books on a train ride to Florida. My Dad took me to conventions, stores, and anywhere that might have comic books. He had the collecting bug as well,” Versaggi said.
Since that time, although he’s much better known in collecting circles for his original comic art collection, it’s been comic books that hold that special place in his heart.
“My drug of choice is comic books and comic art. I can’t explain it. I was drawn to superheroes as a kid and never completely grew up. The fantastic stories, the costumes, super-human abilities, and out-of-this-world locales all just mesmerized me,” he said.
He said he’ll forever think of collecting comics as something that was done in the safety of the home provided by his parents. With that safety or not, he also said that he thinks every collector in every niche of collecting has a story about “the one that got away.” Whether it was an item sold or traded and regretted later, or one simply never acquired in the first place, he’s probably right when he attributes that sense to just about every serious collector.
How often, though, do those things that got away ever come back?
Versaggi’s tale goes back to a family vacation during the summer of 1986, when he was 12 years old. The destination was Lake George, New York, and his father’s penchant for collecting meant numerous back roads and all sorts of shops.
At a farmhouse-turned-store called Scherer’s Antiques, young Jason asked the owner if they had any comic books. To his surprise, two boxes that had previously been out of sight were set before him. He pulled out the ones he really wanted: Batman #39, Action Comics #108, Daredevil #3, Avengers #8, Captain Marvel Adventures #72, World’s Finest #27, Blackhawk #94, a Disney Vacation Parade and some Walt Disney’s Comics & Stories, and an issue of Detective Comics.
Then there was Captain America Comics #70. That one turned into his favorite. 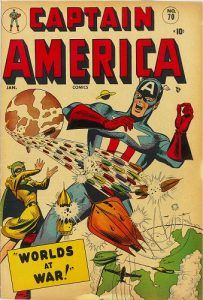 “I did a lot of staring at that cover. It was the most memorable book in the lot to me because it had the huge Cap image with Martian spaceships invading Earth! I didn’t know it was a key sci-fi cover or that it was very off-topic for Cap,” he said. He also didn’t know that it was from an era in which the popularity of superheroes was greatly diminished. It didn’t matter. From his affection for it and its association with his father and his family, it was part of “home.”
“I did not know how to grade comics at this time but I did note this particular issue had some really distinctive defects. It was a very sharp looking book even to my uneducated grader’s eyes but it had a crescent moon-shaped piece out of the bottom front cover and a nearly identical piece out of the bottom back cover,” he said. “Well, no matter, I just loved reading it, looking at it, and smelling it; and I loved that I had found something. I also loved that my Dad had gotten it for me and was so interested in the fact I was so interested in it.”
His collection, collecting experience, and collecting expertise grew over the years. As he was preparing to go to college, he began selling and trading the comics from that trip to Lake George.
It wasn’t right away, but he eventually came to seriously regret the move.
“I was a dumb kid and thought I knew what I was doing. I couldn’t have been more wrong. Not that the deal I did was foolish. I just wish I would have done anything but give up that first find. It wasn’t right away, but as the years went on I had such pangs of remorse for giving up those comics. I missed them,” he said.
He continued collecting and got seriously into original comic art. After his father passed away in 2012, he wondered if he would continue collecting at all. His efforts to continue collecting were colored by his memories of his father and the conventions and stores they visited together.
“I often wondered where my comics were. What became of them? Who owned them, if they even still existed? I wished to see them again,” he said.
Versaggi said he mostly doesn’t go to conventions anymore, but relented when fellow collector Nick Katradis (with whom he was profiled in July’s special comics section of this publication) persuaded him to attend the 2017 Baltimore Comic-Con.
Looking out his hotel window and down on Oriole Park, he flashed back to days with his father. That thought was with him as he made his way to the Baltimore Convention Center.
On the wall of the Bedrock City Comics booth, a copy of All-Winners #1 caught his eye. Next to it he saw the familiar white cover and spine of Captain America Comics #70.
Naturally he thought of the one he used to own. When he reached for it, he saw the familiar crescent moon shaped hole on the bottom of the front cover. He told the dealer what the backcover would look like. The dealer asked how he knew that.
“This is my copy,” he said.
“I was overcome with emotion, shaking as I thought about this comic book that I first held over 30 years earlier, that I had not held or seen in over 20 years,” he said. “It looked just as I remembered it. And I thought of my Dad. My Dad, if he were still alive, would havegladly been at the comic show with me, still trying to help me get some comics. In a very real way he was.”
His friend, Katradis, couldn’t believe it. He called his sister, who remembered it as well, and she couldn’t believe it. He called his wife, who told him, “Do not leave there without it.”
He took her advice.
“I got to be at a show with my dad once more,” Versaggi said. “I got to go home again.”
J.C. Vaughn is Vice-President of Publishing for Gemstone Publishing.