Rudy Ciccarello: From Collector to Curator
From the early collecting days in 1997 to the summer of 2004, Rudy Ciccarello, founder of Florida Infusion Services, a combination I.V. Therapy Pharmacy, Joint Commission Accredited Home Health Nursing Agency, and nationwide distributor of pharmaceuticals, amassed one of the largest collections of important examples of the Arts & Crafts Movement (A&C) including furniture, tiles, pottery, metalwork, and fine and decorative arts. Soon the need to safeguard these art objects was recognized and the Two Red Roses Foundation was established and endowed with the large majority of the collection. Recently the Two Red Roses Foundation formally announced plans for the construction of the Museum of the American Arts and Crafts Movement (MAACM), which will become the permanent home for the Foundation’s comprehensive collection. The new museum is expected to open in 2018.
Rudy Ciccarello always had an interest in antiques having been surrounded by them growing up in the family home in Rome, Italy. “I became interested in American A&C in the late 1990s. I was first introduced while visiting a local antique workshop and noticed in the owner’s building what I found out to be a reproduction of a Gustav Stickley bookcase. The A&C style at once resonated with me and I soon purchased my first Gustav Stickley bookcase at an auction in Boston, Massachusetts. From that auction my passion grew as did the collection. What began as furniture from the movement evolved into all the varied art forms so that now every genre is represented in the collection from pottery to photography to lighting and beyond.” 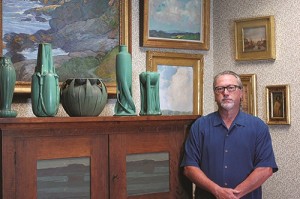 Rudy describes his collection as one that is broad in scope yet narrow in focus; a collection that examines the history of the period. “I have endeavored to bring together the most important examples of work created by the most notable artists during what I believe is an important yet somewhat overlooked period in American History.”
His love for and interest in the A&C movement has led Rudy to commission seven catalogs by the foremost scholars of the period to provide a written history of his collection, including So Various Are The Forms It Assumes: American Arts and Crafts Furniture from the Two Red Roses Foundation, by David Cathers; These Humbler Metals: Arts and Crafts Metalwork from the Two Red Roses Foundation, written by David Cathers, Jonathan Clancy, and Susan Montgomery; The Endless Possibilities:
Arts and Crafts Tiles from the Two Red Roses Collection, written by Susan Montgomery; and Radiance: Arts and Crafts Electric Lighting: Beautiful, Useful, Inevitable, written by David Cathers.
What draws Rudy to this aesthetic is the philosophy behind the movement itself; the emphasis on simplicity and organic forms and an appreciation of workmanship and handcrafting over the increasing rise of poor quality, mass-produced items.
“There are major artisans represented in every genre from the movement that I find remarkable. Each had their own distinctive and original design style and creative process. To name but a few there is, of course, Gustav Stickley, perhaps the most recognizable figure from the period whose furniture defined the movement, the Gruebe Tile and Faience Company for pottery and large architectural installations, the Roycrofters colony for metal work, Dow’s classic woodblocks, Steichen’s iconic photography and the list could go on.”
Rudy says he is pleased to see a sort of renaissance and appreciation for craftsmanship and hand-made art by contemporary artists today that can be traced back to the very ideals held by artisans from the A&C era. “These potters, stained glass artists, metal workers, furniture makers, woodblock artists, and others are creating their own original art as well as reproductions. There is a growing public recognition and acceptance for the work of these craftsmen. In addition, giant retailers like Restoration Hardware offer complete lines of A&C furniture and fixtures and of course, there is Stickley Furniture still producing quality reproductions.”

Rudy’s dream of building a museum began nearly ten years ago when he envisioned creating a place where the collection, which then occupied several large warehouses due to its size, could be kept. “A place where the objects could be seen, appreciated, and enjoyed by the public. A warm and inviting place where the history and story of the movement could be told to the young and old.” Three years ago, while still acquiring important works of art, the search for the right architect and the right building site began in earnest. “I was fortunate to find the perfect location in St. Petersburg, Florida.” Construction on the Museum of the American Arts and Crafts Movement, MAACM, is scheduled to begin this spring on what will be one of the largest museums in southeast. The opening is expected in the spring of 2018.
For more information on the Collection, MAACM, and Two Red Roses Foundation visit www.tworedroses.com.

Return to Craftsman Farms: Gustav Stickley in the Twenty-First Century