RECENT AND UPCOMING EVENTS AT GEM

The Journal of Antiques and Collectibles – September 2012
By J.C. Vaughn

July proved to be a busy month for Geppi’s Entertainment Museum (GEM) with activities at and nearby the museum’s facility in Baltimore’s famous Camden Yards sports complex. GEM is located in the Camden Station building, a historic 1862 rail road station situated immediately next door to Oriole Park and directly across the street from the Baltimore Convention Center (and just a brief walk from the tourist-friendly Inner Harbor). 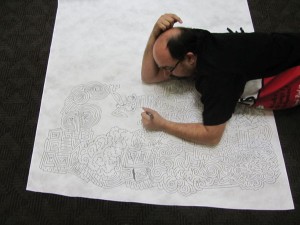 Joe Wos, Executive Director of Pittsburgh’s The ToonSeum, was in Baltimore for GEM’s “A-Mazing Maze Maze-tacular,” at which the award-winning cartoonist started his attempt to break the Guinness Record for world’s largest solvable maze over the July 27-29, 2012 weekend.
While Wos worked on the project – which went from nothing to “if it was a shark it could eat you” size – he delighted GEM patrons with insight into the creative process, while they watched him work – demonstrating phenomenal multi-tasking skills.
In addition to founding The ToonSeum, Wos is a nationally acclaimed cartoonist, storyteller and master maze maker, as well as a resident cartoonist of the Charles M. Schulz Museum. His previous mazes have been featured in the Ripley’s Believe or Not Museum collection as the World’s Most Difficult.
His personality was a huge hit at GEM – no surprise to those of us who had met him previously – as he also performed his “Once Upon A Toon,” a delightful combination of storytelling and illustration, for an enchanted audience. Accolades where shared with the museum staff by the patrons who attended the event.
“Overall it was a true delight having Joe at the museum. Geppi’s Entertainment Museum looks forward to Joe’s future travels with his A-Mazing Maze, and awaits with baited breath what the super secret next location will be. We hope it’s nearby, cause watching him at work, well it’s A-Mazing!” said GEM’s Andy Hershberger.
The maze will stretch over 40 feet long when completed and feature intricate hand drawn cartoon illustrations throughout. The Schell Games World’s Largest Maze is sponsored by Schell Games, Visit Pittsburgh, Star-Kist and Guardian Storage. The next stop on his tour will be the Cartoon Art Museum on Saturday, August 11, 2012, followed by a trip to the Charles M. Schulz Museum.
It was announced a month earlier that GEM and The ToonSeum have agreed on a new arrangement through which the museums will offer reciprocal memberships, share and co-promote a full range of special exhibits, and co-sponsor convention programming, among other activities. In addition to reciprocal memberships and the accompanying reduced rates on admissions, the two facilities will also offer each other’s members a 20% discount in their respective gift shops. 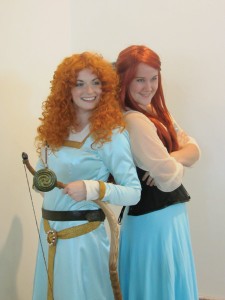 The Japanese word “otaku” has had multiple meanings over the years. It has developed an English-language use that remains tinged by its national origin but has also taken on the connotation of referring to an obsessive fan of Japanese anime or manga (animation or comics, respectively). It’s also used as something of a synonym for “geek,” at least in the positive sense, or to describe someone who has a mastery of a given subject.
Across the street from GEM, while Joe Wos was initiating his Guinness record attempt over the July 27 – 29 weekend, Otakan, a huge fan gathering, took place at the Baltimore Convention Center.
This convergence of the Otaku generation – fans of Asian pop culture such as cinema, manga, and anime – turns Baltimore into a cartoon landscape, with fans in costume seen not only in the convention center but all over the nearby downtown area. Costumers represented not only Japanese characters but many from American film and television as well, right up to Merida, the lead character from Pixar’s Brave.
The interaction between Otakon, which celebrated its nineteenth gathering with literally thousands of fans in attendance, and GEM, has been increasing. GEM’s exhibits include many pieces that inspired the earliest manga and offered attendees half-price admission.
Otakon responded by inviting GEM passes to experience the event, which they did (some staffers even went in costume), and both groups expect even more cooperation for next year’s 20th anniversary Otakon.

GEM has reported its best attendance for one year ever.
“With a full five months to go, we have already exceeded our best attendance mark ever,” said Melissa Bowersox, President of GEM. “And with what we have coming up, we believe that trend will continue.”
There are a number of special events planned for the remainder of 2012 and early the following year, she said.
The highest profile exhibit is scheduled to open for Black History Month 2013. GEM will present “Milestones: African Americans in Comics, Pop Culture and Beyond,” a major special exhibit developed and curated by Michael Davis, co-founder of Milestone Media.
The special exhibit will run from February 1, 2013 until March 1, 2014 and it will feature not only the work of mainstream Black creators, but also that of those who consider themselves outside the mainstream, and even those who want nothing to do with the mainstream.
August 31-September 2 will see GEM’s participation as a host location of the second Baltimore Grand Prix.
March 2013 will bring GEM’s third annual Zombie Gras, and there will be numerous other events between now and then.
“As more and more people are discovering, GEM has a lot to offer those who are interested in pop culture. And there’s lots more to come,” Bowersox said.

J.C. Vaughn is the Associate Publisher and Executive Editor of Gemstone Publishing. GEM’s Andy Hershberger contributed to this column.