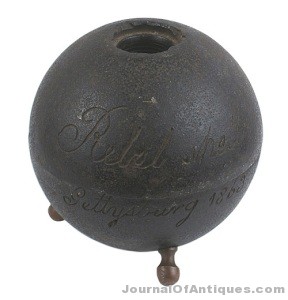 A Confederate cannonball from the Battle of Gettysburg in 1863, mounted on three brass leg finials, sold for $5,850 at Mohawk Arms’ Auction #71 held June 13-14 online and at the firm’s gallery in Bouckville, N.Y. Also, a Civil War felt fez hat worn by a member of the 11th New York Fire Zouaves brought $5,850; a uniform worn by SS officer Karl Franz, the last Kommandant of the German Nazi concentration camp at Treblinka, realized $10,238; and a Japanese Yasukuni World War II shrine sword made $5,265. Prices include a 17 percent buyer’s premium.