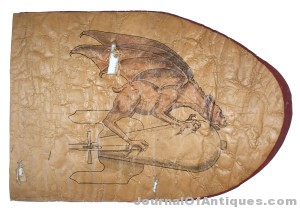 A World War I aircraft squadron insignia and archive of American pilot Lt. Paul Edison Green sold for $12,000 in a live and Internet auction held June 8-9 by Mohawk Arms (MilitaryRelics.com), online and in Bouckville, New York. Also, a German SS officer’s dress sword with wire wrapped wood grip and black enamel steel scabbard realized $6,750; a Japanese Order of the Pillars of State breast star of the Grand Cordon fetched $1,750; and a WWII U.S. Marine-carved coconut caricature of a Japanese soldier hit $600. Prices are hammer, exclusive of a commission.