From Collector  to Auctioneer

Boy has the hobby changed
By Jeff Wichmann 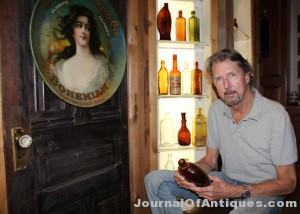 Having been a collector of antique bottles since the 1970s, I have watched as the hobby has gone from a national past time to a whimper and back again. Like any hobby that involves assembling various objects for display or simply for the astute collector to sit and admire, the collecting of antique bottles (mainly bottles made in America from 1840 to 1900) has been a most rewarding one for me.
Before we go too far, you may be asking what and why old bottles? Well, that’s a good question and the answer is as complex as it is a simple one. Antique bottles have an inherent beauty and history that few other collectibles can match. Not convinced? Well first off, you can display bottles unlike coins, stamps or baseball cards. They beautify your home. They teach you history. Bottles are divided into east and west coasts. Since the east was more populated the bottles they made are more diverse and, well fancy. Collectors usually collect from the part of the country they live in. Some, like me, collect anything that attracts them. Collectors go for form, type or category like medicine or whiskey bottles. Most collectors stick with one category, inkwells, sodas, etc. Most bottles come in one color like amber or aqua, when a blue one pops up the price can escalate quickly. They can also come in a combination color shade like greenish amber. That adds value. The three most important factors are color, condition and rarity. Rarity can be in both the bottle itself e.g. how many are known, and by having a rare color. Age is also a factor, but it doesn’t mean it’s more valuable. Rarity, although very important with some bottles, doesn’t mean nearly as much for others. Bottom line is collectors are looking for the best looking, rarest and best condition bottle as possible, in the category they collect. 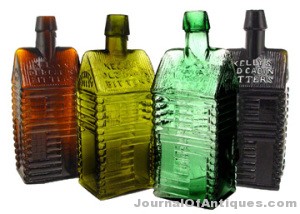