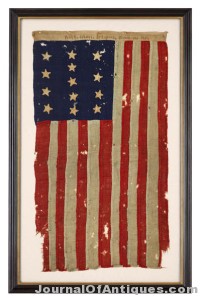 A rare, 18th century flag of the United States with just 13 stars sold for $212,500 at a sale of American Furniture, Folk Art & Decorative Arts held Apr. 18 by Freeman’s Auction in Philadelphia, Pa.  The flag was made and used at a time when the nation comprised just 13 states. It is believed to be the most ever paid for a flag of its kind at auction. It was also the third time in the last 18 months that a flag realized a record auction price at Freeman’s. Also, a 1904 St. Louis Olympics participation medal made $31,300. Prices include a 15 percent buyer’s premium.

The Cult of the Flag