News & Views From the World of Antiques & Collectibles
By Ken Hall
When it’s a rare, century-old nickel sold at auction through Heritage Galleries of Dallas, that’s when. The 1913 Liberty nickel, one of five known, was recovered from a fatal car crash and then unsuspectingly kept in a closet for 41 years because it was thought to be a fake. The winning bidders – Jeff Garrett of Lexington, Ky., and Larry Lee of Panama City, Fla. – bought the coin in partnership for $3.17 million on Apr. 25 as part of Heritage Galleries’ Central States Numismatic Society U.S. Coins Auction in Schaumberg, Ill. 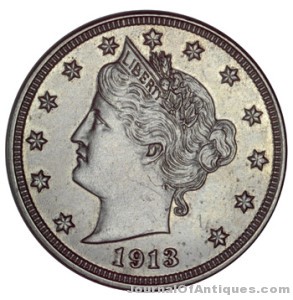 The nickel was consigned by the heirs of George O. Walton, a North Carolina collector who acquired the coin in the mid-1940s for $3,750. He had it with him when he was killed in a car crash on Mar. 9, 1962. Melva Givens of Salem, Va., one of Walton’s heirs, eventually received the coin after being told it was suspected of being an altered date fake. She kept the nickel in a box with other family items in a closet for four decades. It was authenticated by experts in a secret midnight meeting in Baltimore in 2003.