Gavels and Paddles
Results of Recent Auctions From Around the World 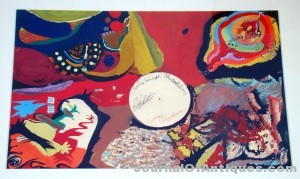 A painting done collectively by all four Beatles when the band was on tour in Japan in 1966 sold for $155,250 at a multi-estate auction held September 13-15 by Philip Weiss Auctions in Oceanside, NY. Also, a vintage 1965 Beatles autographed group photo, signed by all four band members, went for $22,200; a circa 1963 Beatles autographed album page signed in ballpoint ink by George Harrison and John Lennon brought $10,925; and an original watercolor collage painting by rock legend Frank Zappa made $10,925. Prices include a 13 percent buyer’s premium.