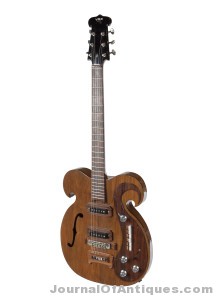 A rare VOX guitar played by two legendary Beatles – John Lennon (while recording a video session for Hello, Goodbye) and George Harrison (while practicing I Am the Walrus for The Magical Mystery Tour) – sold for $408,000 at a Music Icons Auction held May 18 by Julien’s Auctions at the Hard Rock Cafe in New York City. Also, Conway Twitty’s 1957 Gretsch guitar went for $23,750; the pants Elvis Presley wore in the movie Jailhouse Rock brought $12,500; and Presley’s Hammond organ hit $34,375. Prices include a 20 percent buyer’s premium.