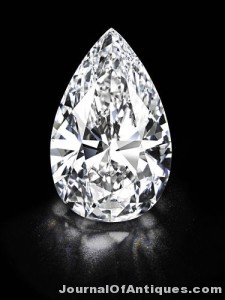 A new world auction record for a colorless diamond was set in May when a pear-shaped, 101.73-carat stone sold for a staggering $26.7 million at a Magnificent Jewels Auction held by Christie’s in Geneva, Switzerland. The buyer was Harry Winston, the world-famous jewelry and watch firm. The diamond reportedly took 21 months to carve after it was discovered in a mine in Botswana, Africa. In all, 257 lots realized about $102 million in the auction, where new world auction records were also set for pearls and sapphires.