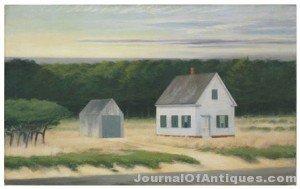 An original oil on canvas painting by Edward Hopper (Am., 1882-1967), titled October on Cape Cod, sold for $9.6 million at a sale of American art held Nov. 28 by Christie’s in New York City. It was a new record for the most expensive item sold to an online bidder at any international auction house. Also, Georgia O’Keeffe’s Sun Water Maine achieved $2.2 million; Charles Ephraim Burchfield’s Golden Dream soared to $1.2 million; and Stuart Davis’ City Snow Scene also crossed the block at $1.2 million. Prices include a 12 percent buyer’s premium.