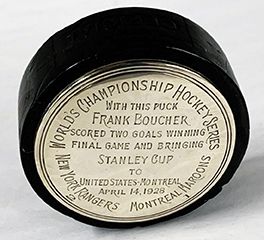 A hockey puck used in the final Stanley Cup championship game of 1928, won by the New York Rangers over the Montreal Maroons, 2-1, with Frank Boucher scoring both goals for the Rangers, sold for $66,000 in an online Sports, Non-Sports, Pulps, Comics & Comic Art auction held April 14th by Weiss Auctions in Lynbrook, NY. Also, a complete international set of Magic: The Gathering cards, 362 cards in all, in the original box, with one of the cards graded, made $20,400.