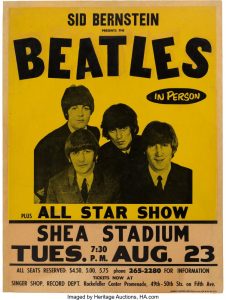 Recent Auction Results From Near & Far
By Ken Hall
A rare 1966 concert poster from The Beatles’ performance at Shea Stadium in New York sold for $137,500 at an Entertainment Auction held April 4 by Heritage Auctions in Dallas, Tex. It was the most ever paid for a concert poster sold at public auction. Also, a Buddy Holly & The Crickets concert poster, promoting a Winter Dance Party concert in Mankato, Minn., featuring the Big Bopper, Dion and the Belmonts and Richie Valens, just days before the fatal plane crash, brought $125,000. Prices include the buyer’s premium.