Recent Auction Results From Near & Far 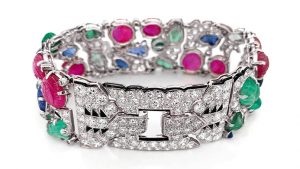 By Ken Hall
A magnificent ‘Tutti Fruiti’ bracelet by Cartier, created circa 1930, sold for $1.34 million in an online auction held April 24-28 by Sotheby’s in New York City. The Art Deco jewel had never before appeared at auction, having been passed down through descendants of an American family for more than 30 years. Pursued by five bidders, the bracelet far surpassed its estimate of $600,000-$800,000. It was the highest price for any jewel sold at auction in 2020, at any auction house. The price includes the buyer’s premium.