It took a twisted mind!
by Bob Cahn – “The Primitive Man”
Even though this month’s GUESS WHAT is a one-of-a-kind,  it didn’t start out with that in mind. It turned out the design was too complicated to duplicate in production.
When we select a candidate for each month, we look for the unusual and is this a doozy. The spotlight focuses on a visual puzzlement of major confusion.
Only a twisted mind with a hairpin brain could dream up this giant version of the old Cracker Jack in the box puzzle prize.
Never in our wildest imagination could we believe that this wire-hanger gone wild ever existed. But your eyes are proof positive, and Mike Goodman’s keen eye and photograph attest to that fact. 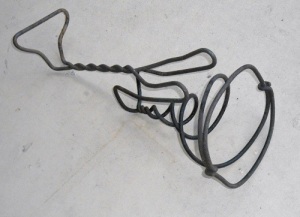 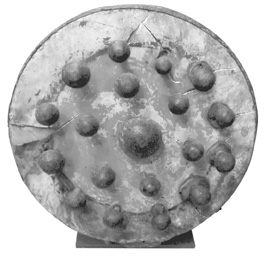 If you guessed African open field iron ring toss game for last month’s challenge, you were right.
The receiver wore this round, painted circled chunk of wood (with a gloved backing) featuring a series of random outer circle smaller forged iron knobs — with the larger one dead center.
As your opponent tossed the iron rings, you scored for each one caught — with center or bulls-eye counting for more.
It called for exceptional hand strength to manipulate this heavy chunk of wood.*
*Many thanx to Jennifer Price Studio, Cedros St., Solana Beach, Ca.