The Lure of Lunch Boxes 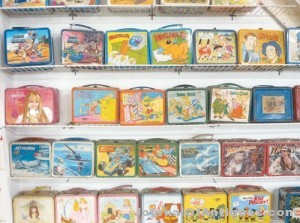 Lunch boxes are collectibles that have a soared tremendously in popularity recently. Throughout history people have always needed to transport food, but of course, nobody ever dreamed that these metal boxes could be worth a fortune.
There are a number of characteristics that combine to make the lunch box a collectible. The lunch box represents childhood, television, food, school, parents, and more. As so many of these boxes were lost, it has become a treasure.
It is hard to believe, but some of these boxes are sold for more than $10,000. The first “character” lunch box was the dream child of Walt  Disney who put Mickey Mouse on a lunch box in 1935. But it was really television, not movie cartoons or comic strips that put lunch boxes on the map. In the early 1950s  Hopalong Cassidy of television fame gave Aladdin Industries the rights to replicate him on the blue and red lunch boxes and on the thermos inside. Shortly thereafter, the American Thermos Bottle Company did the same with Roy Rogers. 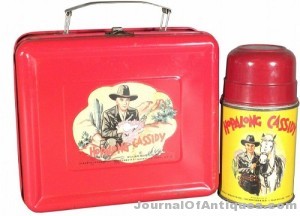 However, it was really Superman who coveted the most attention. From the mid 1950s to the mid 1980s, Aladdin and the American Thermos Bottle Company dominated the market with their Superman boxes. Both companies did, however, produce more than Superman boxes. During that time other popular characters on boxes included Davy Crockett, Howdy Doody, Rat Patrol, Care Bears, Star Wars and Star Trek characters, Miss America, and The Flying Nun. The last of the big movie characters to don a lunch box was probably the Sylvester Stallone character “Rambo”.
Chances are at the end of the lunch box era came about because the boxes became too costly, and often they were lost. They were also used in brawls by those innocent young darling children, and found to be dangerous. 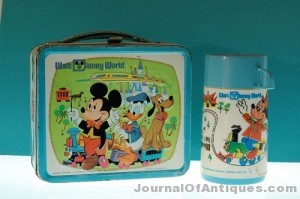 Nonetheless, collectors of lunch boxes are often called “boxers” or “paileontologists”, and take their collecting very seriously. As a whole, the most valuable collectible theme character is Superman, followed by Hopalong Cassidy, Howdy Doody, and Roy Rogers.
As a single box, many collectors claim that the most desirable box is the “Toppie” Top Value lunch box of the 1950s and 1960s. These boxes, of which only 10-12 is known to exist today, were distributed in the Dayton, Ohio area. When a shopper filled three Top Value books with stamps, he/she was given a choice of gifts. Many of the shoppers chose the lunch box, which was eventually lost or heavily used, and thrown away. Anybody who owns the Toppie lunch box undoubtedly knows its value and desirability. 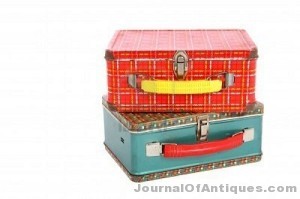 Lunch boxes will continue to increase in value. They are also visually appealing, and are lightweight, and easily movable. With the advent of the baby boomers, in particular, they are extremely nostalgic. As many people are not aware that they are so collectible, it is quite possible that you might be able to pick one up at a swap meet from an unsuspecting vendor. Chances are it would be the highlight of your day, maybe even your week.