We all know what scrolls are, but why are they scrolls? There is a long history, all over the world, having to do with things that are written and then rolled up for easy transport and for ease in unrolling, either to view or to read.

These rolled writings span the gamut from ancient biblical texts, from commendations and royal appointments, to even the simplest messages that in war time might have been carried by a messenger pigeon but that’s not what we mainly think of when we think of scrolls.
When we think of scrolls, we might think of paintings we have seen produced in China or Japan hanging in a museum or hanging in a shrine but why can they also be rolled up? The answer is quite simple in that scrolls can be hung and viewed, then rolled up and replaced with another one quite easily. One could own a number of these and actually never have many unrolled and hanging at any one time. They store easily.

Let’s look at what would constitute a scroll. Most scrolls have a vertical orientation and scrolls generally, whether produced in China or Japan, were painted on paper or on silk; then glued to a backing, with a water soluble glue and then mounted with borders; these with a wood dowel at what constitutes the bottom of the scroll and with a thin piece of wood at the top of the scroll and with a silk or cotton ribbon or string to tie it tight when rolled up. Now, of course, most scrolls also had scroll ends at the bottom. These could be very simple wood or very elaborate in porcelain, or silver, or enamel, etc. The purpose of the wood dowel and the scroll ends is to provide weight so that, when the scroll was unrolled and hanging, it would lay flat and the painting could be easily viewed. The upper piece of wood served the same purpose but was thin so as to make a neat package when the scroll was rolled up and tied. 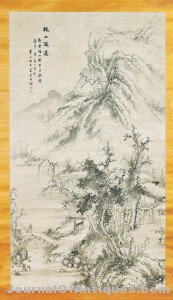 The reason why paper or silk is used is because these are the two most common mediums for Chinese or Japanese paintings. The paintings can be executed simply in ink only, or they can involve complex and minutely detailed highly colorful designs, which in both Chinese and Japanese scrolls, could include calligraphy, mythological subjects, historical subjects, figures, animals and more. They are also often religious in connotation, including Buddhist, Daoist, Shinto and others; which would involve deities, attendants and scenes. In China, as well as Korea, many scrolls were Ancestral portraits honoring relatives and court figures. In Tibet and Nepal, as well as China and Japan, there were religious scrolls, some of which were called Tankah and painted on cloth featuring various deities. 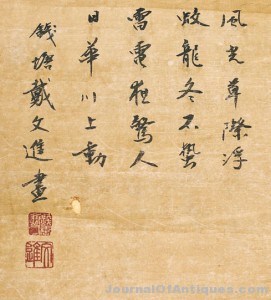 As an aside, we should mention that there are also horizontal scrolls. These are generally referred to as ‘hand’ scrolls. They very often include calligraphy text or poems. They are sometimes commendations or appointments from the royal court and sometimes they are just very long continuous scenes. These scenes could be figural, mythological, birds and flowers, animals, etc and they generally roll out from 6 or 8 feet to as much as 20 feet long.

As value is an important consideration for collectors and collections, there are numerous factors which make up how scrolls can be valued or de-valued. As in Western art, the value of a scroll painting has more to do with the artist and subject matter and less to do with the age — although age can count.
Condition is also an important value factor, as paper and silk are both fragile. Scrolls, both paper and silk, can become ‘toned’ with age, meaning yellowing; or if gotten wet, they may get stained or have little spots called ‘foxing’. In Chinese and Japanese scrolls but more so Japanese, tiny worms seem to have a taste for the glue that’s used in the mounting and if they eat through a rolled up scroll, boring even one single hole, as the scroll is unrolled there is a line of tiny holes. This is called ‘wormage’.
Scrolls are often remounted to maintain condition and sometimes cut before remounting to remove damaged areas. Depending on the artist, the scroll can be quite valuable even when trimmed, cut or showing signs of age.

Just as in Western art, scrolls are copied and works by very famous artists are copied over and over again through the centuries and Dynasties. For example, a Chinese court painter in the 12th or 13th Century (Yuan Dynasty) may have had his work copied in the 16th Century (Ming Dynasty), and perhaps again in the 18th Century (Qing Dynasty) and possibly again in the last decade. Art and artists are very common in Asia and many people draw, paint and do calligraphy. If you go to a museum in Europe or America, you will very often see artists with their canvases and easels copying famous works that are hanging. This is also true in Asia.
Some of the most valuable Japanese paintings were painted many hundreds of years ago although some, one or two hundred years old, if done by famous individuals can also be valuable. In China, on the other hand, very little of the most valuable classical paintings ever come on the market. The most popular collecting area or period of Chinese paintings are those executed in the early 20th Century by artists who are now considered masters. This leads to a very unique problem in that these paintings were neither terribly expensive nor valuable when first painted but they have now risen from thousands of dollars, to tens of thousands of dollars, to hundreds of thousands of dollars and some even into millions of dollars, if the artist is important enough.

So here is the dilemma for the collector and it’s a dilemma which becomes more and more complicated daily. How does one determine whether a painting is genuine? This was fairly easy some decades ago but with the vast quantity of copies currently on the market and constantly being created, it becomes more and more difficult. It has become so difficult, as a matter of fact, that the major Chinese auction houses, especially in the People’s Republic, will no longer guarantee the authenticity of these 20th Century paintings. Of course they do their due diligence and try and bring things to market that have some provenance or that their painting experts conclude are correct, but too often this doesn’t work and the paintings turn out to be copies. 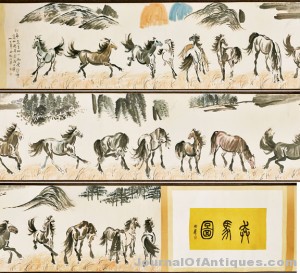 For an average collector, who is buying for decorative purposes, what I have just said previously should not dissuade a decorative purchase. Even these modern scrolls are beautiful and many can be bought very reasonably, both Chinese and Japanese.
Many people frame their scrolls. Others just hang them. As in all works on paper or fabric, sunlight is damaging so if framed, UV plexi would be important and if just hanging, direct sunlight should be avoided. If rolled up to be stored, they should be wrapped in plastic or put in bags and then sealed or tied to avoid moisture. For decorative purposes, the most important criteria for collecting would be subject matter and color. Fortunately the availability of these kinds of scrolls, both Chinese and Japanese, are plentiful and for a few hundred dollars today one can still buy incredible works of art that are hand painted and should last a lifetime. 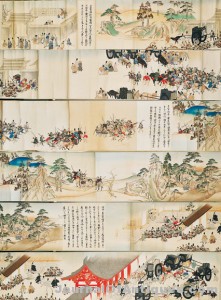 All images courtesy of I.M. Chait.

One thought on “Asian Scroll Paintings”