Guess What Article for November 2002 The Journal of Antiques & Collectibles
By Bob Cahn, “The Primitive Man” 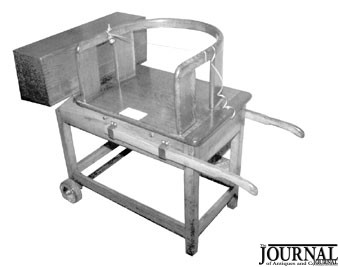 There are rare occasions when we come across a semi-obvious object and this month’s “Guess What” is one of them. Right off the bat, we’ll stipulate it’s a scale, with the weighing mechanism and sliding adjustments and attending graph paper in the enclosed attached box to the left. Having said this, we must mention there’s the inevitable catch – challenging you to figure out what was weighed.

Here’s another given. Obvious examination shows a seat (with rolling wheels and wheelbarrow-like handles for mobility) – which immediately conjures up a sitting situation. Why would a person sit on a scale?

We’ve come up with several possible explanations, such as:

Tune in next month for the answer checking in at number eleven. Till then.*

Last month’s “Guess What” had the inscription: “Brewsters Patent” on the brass spring clip. We didn’t mention it, feeling it had no pertinent relevance. Also imprinted was the description: “safety reins holder.” That was relevant, but we couldn’t reveal it then, because that would have given the game away – and blown our cover of being smarter than our audience. We’re entitled to a little smugness, occasionally. The cast iron bracket portion fit on the edge of the buggy wagon dashboard – and the reins were wedged under the spring clamp for security – when parked.

Measuring the Appeal of Antique Scales