by Bob Cahn – “The Primitive Man”
Size Does Matter! 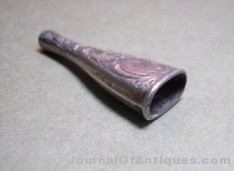 Rarely do we give credit before presenting our monthly Guess What, but one of our favorite contributors/scouts/sources… is George’s Antiques of Fullerton, CA.
His top honcho and demon researcher, Brenda Wieser, came up with this rare and pristine Victorian mini kit. We suggest you take careful note of the dimensions as referenced by the “penny” comparison in the photo. 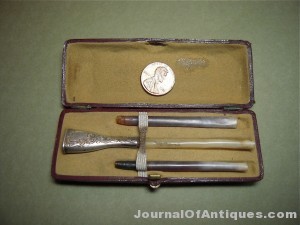 It comprises a Liliputian-sized embossed sterling silver funnel and two clear quills. No further description is needed, except to note that slightly different coloration appeared on the quills when in actual use. The diminutive size of the funnel is 11D 2″ long and 1D 2″ wide and 1D 4″ thick. 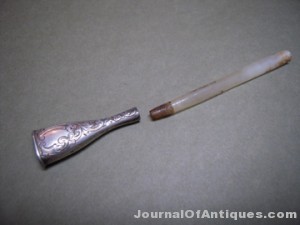 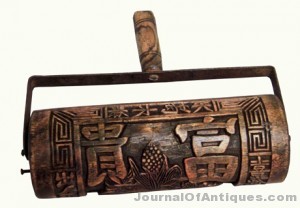 Answer to October’s Guess What
Last month’s Guess What featured an integral part of an early Chinese burial ritual — where a counterfeit money printer is used to roll out — by inking the roller, spurious paper money.
It was either buried or set on fire at the gravesite. The belief was that the money smoke wafted aloft, accompanying souls on their heavenly journey. This enabled them to acquire after-worldly goods and comforts for their eternal existence.*
*Available for acquisition.

Samplers: An Evolution of Purpose & Design