When collectors like myself come across a signed cancelled check, I see a piece of history, a moment frozen in time that conjures up thoughts like where was that person at the very moment they signed that check and what was going through their mind?
Could they have been in a locker room right after hitting three home runs that day? Is it possible they might have been curled up on their couch, coffee in hand, reading a script for their next Oscar performance? Is it conceivable they were sitting in a smoke-filled basement with their “crew” at a meeting to discuss their next murder for hire?
More importantly, how did that check make it from their hands to mine?
For more than three decades I have been a die-hard collector, on a hunt to preserve history. Each check I acquire is like performing a vow; “I, take you to have and to hold, from this day forward, for better, for worse, for richer, for poorer, in sickness and in health, until death do us part.” It’s a commitment I have made to preserving the days that only our parents whisper about when they reminisce about “days gone by.”
Well let’s turn back the clock for just a moment and, imagine the surroundings or conditions when these people signed their check:
• Marilyn Monroe writes one to Hedda Rosten, her secretary and a very close friend, written on October 13, 1961, only days after she meets Robert Fitzgerald Kennedy at a dinner party while they dined with Peter Lawford at his beach house.
• Babe Ruth writes a check to his wife for $1,000 on May 26, 1940. Less than one year after Ruth reunited with Gehrig at Yankee Stadium for his farewell speech.

• New York Crime Boss Carlo Gambino writes a check to himself on October 4, 1962 for $400 on behalf of his consulting company S.G.S. Associates, a labor relations company that Mr. Gambino formed with George Schiller, a Russian-born businessman and Henry Saltzstein, a convicted burglar.
• President Lincoln on July 16, 1860 writes one to the “Second Portuguese Church” for $5.00, only a year before he becomes the 16th President of the United States of America. 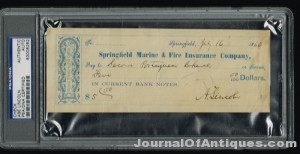 • John Lennon writes one on March 18th, 1971, drafted from the “Maclen (Music) Ltd.” for £301 to Burr, Burns & Company only six days after releasing the single “Power to the People” in the UK.
Which brings us to the history of the piece of paper we refer to as a “check.” What is a check? It’s a piece of paper that instructs a financial institution to make a payment from a bank account to a recipient. It dates back as far as the Romans about 352 B.C. However, it didn’t quite catch on until the 1500s when the international shipping and trade industry found they needed an alternative to carrying wads of cash. The first printed checks are traced to 1762 and British banker Lawrence Childs. The word “check” also may have originated in England in the 1700s when serial numbers were placed on these pieces of paper as a way to keep track of, or “check” on, them.*
After a bank clears the funds, a check is written, approved, accounts are credited; checks are stamped with a cancellation mark (i.e. “PAID” stamp) and sent back to the signee. This kind of paper trail eventually ended up being filed away at the bank, or sometimes stored in a filing cabinet that would end up tucked away in someone’s attic. There checks sat, collected dust and outlived those who wrote them. Once in a while, when the dust is blown off the paper and they see the light of day, they make it back into circulation. And, if you’re some of the lucky few, a check makes its way into your hands to own a part of history.
Rarely have I come across a fraudulent check, but it has been known to happen. Authenticity, in the collectibles industry has always been my number one concern, and it should be yours too. Other factors you want to take into considerations is whether you’re paying a fair price or coming across a cancelled check that has been out of circulation for so long that only a few cancelled checks remain. But remember, when it comes to money, sometimes people will do anything to make a buck.

That reminds me of a time when I was contacted by someone who claimed to have 40 cancelled checks signed by Babe Ruth and was asking $1K for each check. My immediate thought was … RED FLAG! Is it possible this individual owned 40 cancelled checks signed by Babe Ruth? Sure, it’s entirely possible, but chances of that happening are a very small percentage. I decided to put him to the test. I mentioned that I was also in the market for checks endorsed or signed by Lou Gehrig and Al Capone. Within three days, I received an email with images that showed alleged signed checks by both of them. At first glance, I was impressed at how quickly he was able to turn around my request. However, as I dug deeper into the authenticity of the checks I quickly found out that he was purchasing old checks from flea markets and antique stores, and then bleaching them to create the look and feel of a check that went through years of circulation and then he forged the signatures on the endorsed side. Thankfully it wasn’t a costly lesson, but authenticity is the first lesson you want to learn; and a very important lesson I learned nonetheless. 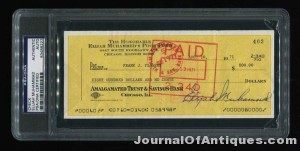 Becoming more and more popular in the memorabilia industry, signed cancelled checks are a rarity and can be traced back to the day, month and year when that specific check was written. They also include a complete signature by the account owner because they are signing a legal document. When someone famous signs an autograph they tend to cut corners because they might be in a rush however, when they sign a check they usually write out their entire name and pay very close attention to scribing each individual letter of his or her name.
Signed cancelled checks are scarce in their own right, but there are ways to increase the value of a signed cancelled check by framing it with items from that time period. Take for instance a signed cancelled check by Thomas Edison. If you designed a frame that included the check and an original cylinder from an old phonograph, chances are the value of the two combined outweighs the amount of money someone will pay just for the check alone. Recently, I purchased a check written out and signed by Jack Kerouac and decided to frame it with a 1958 printing to “The Dharma Bums.” It connects the check to a time when Kerouac published the book and the check was written. 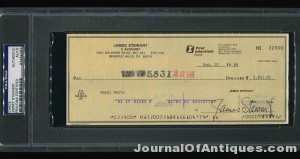 What ultimately lured me into a world of collecting signed cancelled checks was the authenticity of what I was holding in my hands; an actual piece of history. These are some of the same documents that Jackie Robinson, Babe Ruth, Ty Cobb, Errol , Elliot Ness, Carlo Gambino or Marilyn Monroe held in their hands at one time. Signed cancelled checks come from everywhere: Hollywood screen legends, professional athletes, worldwide entertainers, inventors, astronauts, and even leaders of the world’s superpowers.
Imagine owning a piece of this history? Maybe it’s a check Jackie Robinson wrote to his wife for $300 on the same day he was playing at Ebbets Field? Who knows … it could be a check that Neil Armstrong wrote on July 19, 1969 – the very night before he embarked on a trek to become the first man to walk on the surface of the moon. Or maybe, just maybe it’s a check written on September 30, 1927 the actual day Babe Ruth hit his 60th homerun and set a single season record that lasted until Roger Maris stepped up to bat in 1961. 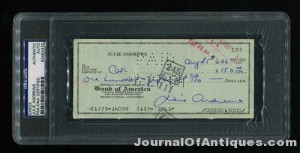 Most people see a signed cancelled check as a simple piece of paper with a signature on it. To me, I see something that connects me to a place and time in history paving a way for a walk down Memory Lane! Pieces of the past that make their way into the hobby and placed into private collections of people who thoroughly enjoy owning an incredible piece of history. A document frozen in time that was once in the hands of Marilyn Monroe, Abraham Lincoln, Al Capone or the Sultan Of Swat, George Herman “Babe” Ruth. These are the days that we collectors thrive on. Taking a trip to the local antique store or an estate sale of a celebrity. Finding documents that were once someone else’s trash but today, they’re our treasure. Welcome to the hunt and never stop. Happy checking. 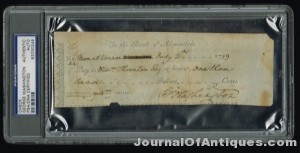 Marilyn Through the Lens