Guess What Article for November 2004 The Journal of Antiques & Collectibles
By Bob Cahn, “The Primitive Man” 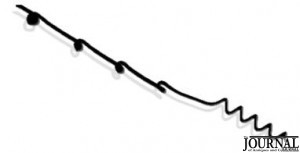 Sometimes we ask our potential brain stumpers to stand tall and be counted (minimum of four used in series). Not an easy task for this month’s GUESS WHAT candidate. Bold and weather-beaten, it has a rugged, gnarly twisted hand-forged look which intimates it’s been around for a while.

How about the Civil War … accounting for its visibly bent appearance and saying how proud it is to have survived this amount of time (still functional, but outmoded).

Standing approximately five feet tall, with a solid iron girth of one inch. Care to make a guess as to its historical past from the following list of suggestions?

The answer is in plain sight; hope myopia hasn’t set in. Revelation next month. ‘Til then! *

When a trap collector comes up empty, his eye turns to “wanna be’s,” as was the case with Dennis Fuse, master trap collector. This trap look-alike is actually a farm implement for storing hay in the barn. Suspended from the ceiling on a track in open, poised position – it was dropped onto an open hay wagon, (self-closing on impact) and hoisted by pulleys and horse power to the loft above – and released by pulling a rope lanyard.*

*From the mixed-up collection of Dennis Fusé, CT & VT

The Triumph of Antique Trap Collecting

On the Road to… New Hampshire