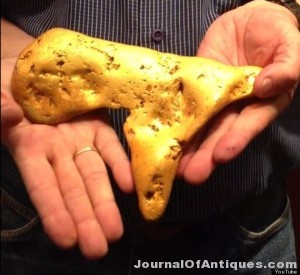 A massive gold nugget weighing 177 ounces (a little over 12 lbs.) has been discovered by an Australian prospector fanning the ground with a hand-held metal detector. The find was made in the town of Ballarat, near Victoria, and the prospector’s identity has not been revealed. He was quoted, though, as saying the sound the nugget gave off in his detector was “like the bonnet of a car through the headphones.” If melted down, the gold would sell for over $300,000. But because of it size and shape, it could bring much more.

The Hupmobile: A Journey Through Time