News & Views From the World of Antiques & Collectibles
By Ken Hall
In an attack one city official described as “infamous and cowardly,” vandals destroyed more than 62,000 bottles’ worth of fine Italian wine when they opened the spigots of ten huge barrels – representing six years’ of production – and let it literally go down the drain. The wine was choice Brunello di Montalcino of the exclusive Soldera label at the Case Basse vineyard and estate in Tuscany. Lost were 16,400 gallons of wine, about half of which would have been sent abroad (10 percent to the U.S.). A bottle of the stuff starts at $140. 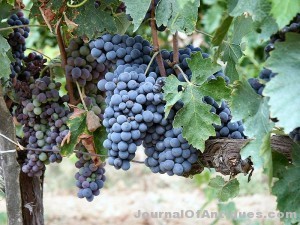 The whole thing has everyone – townspeople, the vineyard owner (Gianfranco Soldera), industry observers and others scratching their heads and asking why. Franco said, “I have never received any threats. I have absolutely no idea why this happened or who could have done it.” No arrests have been made. Franco, 75, a former insurance broker from Milan, and his wife started the estate in 1972 when they bought land that Tuscan sharecroppers had abandoned. He said he will continue to produce wine despite the severe setback.

Ken’s Korner: Stash of red wine turns up in China