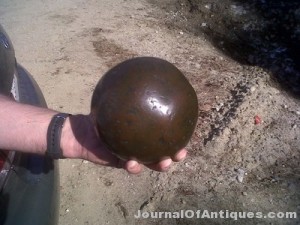 Maintenance workers giving a routine cleaning to an 18th century cannon at the Central Park Conservancy in New York City were startled to discover gunpowder and a cannon ball inside. Authorities were called to remove the gun powder and make the weapon safe for public display. The cannon is from the British Royal Navy Ship the HMS Hussar (circa 1763-1780). Packing material, gun powder and sometimes even a cannon ball are sometimes found inside a cemented cannon when it is X-rayed for cleaning.

Exploring Antique Technologies: Shaped in Steel – Dissecting the Technology Behind your Edged Weapons