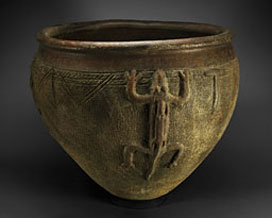 There’s a special exhibit at the Art Institute of Chicago titled “For Hearth and Altar: African Ceramics from the Keith Archepohl Collection.” It runs through Feb. 20 and consists of 125 pieces, representing a fascinating cross-section of African cultures: the geometric Taureg designs of Morocco; the abstract creations of the Zulu potters in South Africa; and the strange animal forms from the Niger and Congo basins, the Sudan and East Africa. Some of the pieces are 500 years old.
But most are from the early to middle 20th century, making them recent by antique standards. The pieces belong to Mr. Archepohl, a printmaker and professor at the University of Iowa. He first became interested in pottery when he looked at pictures of Greek vases and dishes in his high school Latin textbook. But they were thrown on potters’ wheels, glazed and decorated by artisans. By contrast, African pieces are rough-textured, anonymously created and often of unknown purpose.