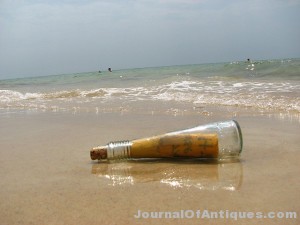 Andrew Leaper, a Scottish fisherman, has discovered the world’s oldest message in a bottle. Inside the bottle, bobbing by his vessel, was a postcard written in June 1914 by Capt. C.H. Brown of the Glasgow School of Navigation. It was part of a scientific experiment, one of 1,890 such bottles that were released in an effort to chart the currents around Scotland. The postcard promised the finder a reward of 6 pence. The previous record: a message just a few years newer, found by someone aboard the same fishing vessel.

From Collector to Auctioneer