Message in a bottle, a record 98 years old 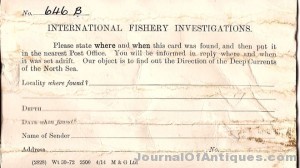 A message in a bottle snagged in a fishing net off the northern coast of Scotland has been confirmed by Guinness World Records as the oldest message in a bottle ever found (it was five years older than the previous record). The message, from 1914, was inside a bottle dragged up by Scottish fisherman Andrew Leaper. It had been released in a batch of 1,890 bottles that year, in a government experiment to map the undercurrents of the seas around Scotland. The message promised its finder a reward of one sixpence (which Leaper can’t claim because sixpences are no longer made).

From Collector to Auctioneer