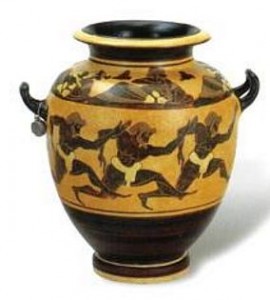 Italian authorities say a pair of ancient vases on display at the Princeton University art museum were obtained illegally. The two Greek painted ceramic vases are more than 2,300 years old. University officials said they acquired the vases legally in 1989. But Italy is tying the sale to the conviction last year of Giacomo Medici for trafficking looted Roman antiquities. The government is using Polaroids from a 1995 raid on a warehouse in Switzerland owned by Medici to track down looted art.
Princeton’s museum is just one of many cultural institutions to come under intense scrutiny by the Italian government in recent months. Italy is looking into more than 100 items it says were taken out of the country illegally, mostly from protected archaeological sites. Many have been linked to the world’s largest museums, including several in the U.S.; these include the Boston Museum of Fine Art and New York’s Metropolitan Museum of Art. Princeton denies all wrongdoing in the matter.
[amazon_carousel widget_type=”SearchAndAdd” width=”550″ height=”200″ title=”More on Greek ceramics:” market_place=”US” shuffle_products=”False” show_border=”False” keywords=”Greek ceramics” browse_node=”” search_index=”Books” /]