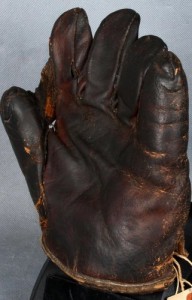 A California man faces up to 20 years in prison for trying to sell on eBay a baseball glove he claimed was from the 19th century and belonged to Babe Ruth but later admitted was a fake. Irving Scheib, 50, of Bonsall, Calif., purchased the mitt in January for $750, as an antique, but posted it on eBay as the Bambino’s, with an asking price of $200,000. In a bizarre twist, Scheib claimed to have gotten the glove from [amazon_link id=”B0012Q3SZ0″ target=”_blank” container=”” container_class=”” ]Father Knows Best[/amazon_link] actor Robert Young, and officials say he is, in fact, married to one of Young’s granddaughters.