News & Views From the World of Antiques & Collectibles
By Ken Hall
In 1947, a Bedouin shepherd threw a stone into a dark cave along the Dead Sea east of Jerusalem and heard the sound of something breaking. Inside, he found clay jars, some of them with rolled-up scrolls inside. He and some companions ended up finding seven scrolls – the Dead Sea Scrolls – one of the greatest archaeological finds of the 20th century. These were the world’s oldest biblical manuscripts, and the Bedouins who found them sold three to a Hebrew University professor and four to William Kando, a Christian cobbler. 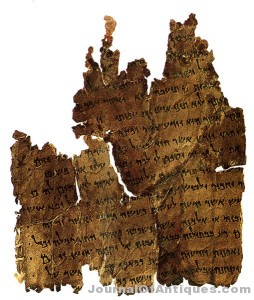 The Kando family ended up selling most of the scrolls to scholars and institutions, but Mr. Kando’s son still has fragments that he’s kept in a Swiss safe deposit box for years that he is quietly offering for sale. Most of the fragments are barely the size of a postage stamp, and some are blank, with no writing at all. But there is still keen interest from many evangelical Christian collectors and institutions in the U.S. The reason Kando is selling on the down-low is that Israel wants the scraps to be recognized as Israeli cultural property.

There is Something Fishy About That Lady