Ken’s Korner: Police have no leads in theft of “nun bun” – The Journal of Antiques and Collectibles – March 2006 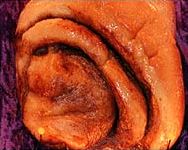 Nashville police are baffled as to why someone broke into a coffee shop at 6 am Christmas morning and stole the “nun bun,” so named because it bears a resemblance to the late Mother Theresa’s face. The bun has been a draw for curious visitors since it came out of the oven and was put in a glass display case in 1996. But it’s too old to be eaten and can’t be listed on eBay. The thief ignored cash lying nearby. Mother Theresa was made aware of the bun prior to her death in 1997.