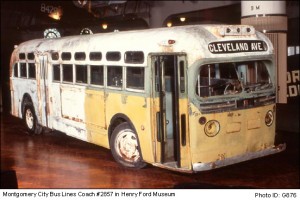 Within days of Rosa Parks’ death in late October, funeral programs from her memorial service in Detroit began popping up on eBay and were fetching more than $150. Not any more. Adam Shakoor, one of two trustees appointed to handle Parks’ affairs, decided to print thousands of the 14-page, photo-filled programs so they’d be nearly worthless to people who wish to exploit her name for profit. The reprints are selling for $5 to $10 each — about enough to cover costs, Shakoor said.
Meanwhile, in nearby Dearborn, Mich., attendance at the Henry Ford Museum is seeing a spike as visitors come to look at the very bus in which Parks refused to give up her seat. The museum purchased the historic bus from Charles Summerfield, an Alabama farmer, in 2001. Summerfield bought it in 1971 after the city of Montgomery, Ala., where Parks took her famous stand by remaining seated, retired it. Summerfield kept it in a field and used it as a toolshed and for target practice.
[amazon_carousel widget_type=”SearchAndAdd” width=”550″ height=”200″ title=”More on Rosa Parks:” market_place=”US” shuffle_products=”False” show_border=”False” keywords=”Rosa Parks” browse_node=”” search_index=”Books” /]

The Horse Fair: A Celebration of Rosa Bonheur’s Equestrian Masterpiece