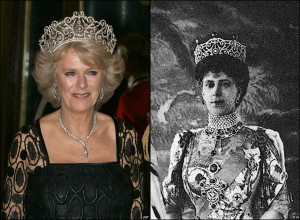 When Camilla, the Duchess of Cornwall and wife of Prince Charles, wore a royal tiara to Buckingham Palace for a recent state banquet honoring the King and Queen of Norway, it was the first time the headpiece had been worn in public since 1947. The tiara, made in 1911 by the jeweller Garrard for Mary, the Queen’s grandmother, is comprised of brilliant-cut diamonds mounted in gold and set in platinum. In June 1988 it was part of an exhibition of royal jewelry at Christie’s in London.
When it was first crafted, the piece was also topped with five Cambridge cabochon emeralds. It was also occasionally worn with two diamonds from the famed Cullinan stone. But the emeralds were removed by Queen Mary and made into another tiara that’s now owned by the Queen. At that time, the diamonds became a brooch. Queen Mary was known for her splendid jewels. She wore the tiara to celebrate the coronation of her husband, George V, as the Emperor and King of India.