News and Views from the World of Antiquing and Collecting
By Ken Hall
A museum curator living in Scotland named Karen Bell has a museum of sorts in her own home: a room dedicated entirely to her massive collection of Smurf figurines and memorabilia, estimated to be worth about $30,000. She started the collection at age six when she purchased a figurine of a Grouchy Smurf holding an umbrella. Since then, it has grown to include 1,200 stickers and books, 1,370 figurines and 117 stationary items. They come from various countries, bought mainly for their different colors and packaging. 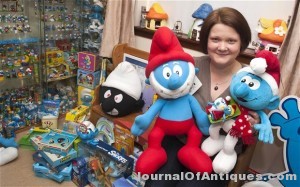 “I’m not sure why I started collecting Smurfs,” Karen told the British press. “I had lots of toys as a child but something about them just kept me fascinated. The number of things you can buy still amazes me. There’s still so much that I don’t have but at the moment I’d like to focus on the figurines. I think they’re the most interesting.” More items are certain to be added, as friends and family continue to buy her Smurf-themed presents for Christmas and birthdays. The room is not blue; that’s where her husband drew the line.