Ken’s Korner: Tests are planned for Joan of Arc’s remains – The Journal of Antiques and Collectibles – May 2006 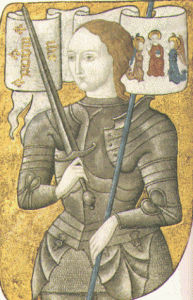 A team of French scientists will analyze what are thought to be the remains of Joan of Arc, the 15th-century French heroine who was burned at the stake at age 19 for alleged heresy by the British in 1431. She was made a saint in 1920. The remains were reportedly recovered from a pyre in the Norman town of Rouen, where she was burned. The tests can’t prove for certain the remains were hers, since none of her DNA exists. But they will be able to conclude whether they’re not hers.
[amazon_carousel widget_type=”SearchAndAdd” width=”550″ height=”200″ title=”Books about Joan of Arc:” market_place=”US” shuffle_products=”False” show_border=”False” keywords=”Joan of Arc” browse_node=”” search_index=”Books” /]