News & Views From the World of Antiques & Collectibles
By Ken Hall
The English Heritage, owners of the famous temple formation and tourist attraction Stonehenge, is advertising for a general manager for the site. The pay is only so-so – around $42,000 a year. But the responsibilities are many and include meeting with Druid leaders and maintaining the “dignity of the stones”; promoting ideas and overseeing arrangements for the summer and winter solstices and seasonal events; offering help to the site’s one million annual visitors; and overseeing the monument’s 180 staff and volunteers. 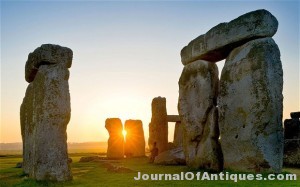 Stonehenge was raised more than 5,000 years ago, as a temple to the sun. Its ditches and banks are thought to be even older. It is aligned with the rising and setting of the sun at the solstices, but the exact purpose of Stonehenge remains a mystery. It was begun around 3,000 BC (in the Neolithic period) and construction continued until around 1,600 BC (in the Bronze Age). It is the first time in the 5,000-year history of Stonehenge that a general manager has been sought for the site. The closing date for applications passed on May 5th.